Cinnamon roll and banana bread are coming together for this delicious banana muffin recipe. It seems like every time I think I want cinnamon rolls it’s 10AM on a Saturday.  I want them now, not at lunch time. Cinnamon Roll Banana Muffins have solved this weekend conundrum. While they still have some sugar in them, they aren’t the sugar and butter ball that cinnamon rolls are. Not a perfect choice, but definitely a better one!

How to make cinnamon swirl for muffins

Traditionally you’d make a butter and sugar mix for the middle of a cinnamon roll. I used apple sauce here for two reasons. One it won’t run everywhere and make the muffins change texture the way butter would do. Two it is far less fattening and these muffins don’t need any more fat than what we get from the oil. To make this easy cinnamon swirl for muffins you only need some unsweetened applesauce , cinnamon and brown sugar. These are things we all usually keep in our pantry. Just mix it up and swirl.

Cinnamon Roll Banana Muffins are the perfect snack or breakfast. With only 3/4 cup of sugar in the entire recipe, they are just sweet enough without having and over abundance of sugar. Rather than use fake sugars or alternative sugars that are expensive and hard to find, I’d prefer to just use less of the real thing. The truth is the more you cut back on added sugar, the less you need it.

These Cinnamon Swirl Banana Muffins got a nice rise from use of a combo of baking powder and soda. Be sure to follow my directions for measuring the batter and swirling the cinnamon mixture in. It’s super important that you don’t overfill or under fill your muffin cups. You want them just popped over the top of the cup like these are.

The prize is the cinnamony center! It’s warm and comforting just like a cinnamon roll. I think you’ll be making these for your family over and over!

If you do , please take me on Instagram at FreshFitKitchen.  I love to see what you’re making!

If you want to make some actual cinnamon rolls check out my EASY Overnight Cinnamon Roll recipe!

Cinnamon Roll Banana Muffins are an easy and delicious way to enjoy cinnamon roll flavor without the extra sugar and the time it takes to make cinnamon rolls.

I have not tried this recipe with gluten free flour. If you're going to try it, I'd recommend Bob's Red Mill 1:1.  In any gluten free baking I've done, it has the best result. I have also not tested the recipe with alternate sugars.

If you don't have avocado oil, you can use vegetable , canola or grapeseed oil.

This site uses Akismet to reduce spam. Learn how your comment data is processed.

My name is Krysten Gossard. I started Fresh Fit Kitchen, because I wanted to spread the message of a healthy whole food life. I hope you enjoy the recipes you find here. Share them with your friends and family and let me know how they worked out for you in the comments. 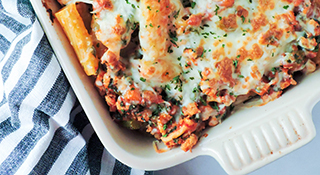 Become an FFK Insider!Join the List! Get a FREE EBOOK with 10 ONE PAN DINNER RECIPES!

Become an FFK Insider and get a free EBOOK with 10 One Pan Healthy Dinner Recipes!